He Gave Me What You Could Never Provide

This is for the person that I am most thankful for this Thanksgiving! 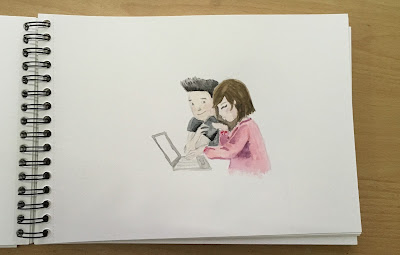 "Why can't you let yourself be happy?" I met him eight years ago, or was it nine? We were introduced by a boy, who later became a man who could not fill the big shoes of men who preceded him. "Why can't you just allow yourself to be happy despite his behavior and choices?" If only it were that easy.

Well, actually it would be that easy. It only takes one decision to let the past dissolve into nothing but memories. But what if I were to tell you that letting go of him and our story would make me the robot that he had fell in love with years ago? What if it means that I would regress to a twenty year old version of me that could not feel the world. My writing would be bland and my smile would merely be a pre-programmed facial expression. I would not be a human being.

"Would you be alright if my happiness meant that I would not be the person you've known for the past eight years?"

He looked at me. Silent. His eyes widened before narrowing. I try to recount the last time he was silenced. I wonder what took a man who nursed me after I crashed to the ground to be silenced. I study the face who's turned up at every book signing and who's popped up in front of my doorstep with a bag full of booze. He's like the partner I never had, replacing the hole that his friend had left years ago.

"What you're saying is I won't even recognize you if you were happy?" He finally asks.
"Think about it. You've never seen me happy." I pointed out the obvious.
"I've seen you happy." he says after a while, "You were happy when he was here, when you caught him smiling at you."

We stared at each other and smiled, fully aware that this is the last time he'd see me show any glimpse of happiness in this state of mind.

"Just remember that people care, that I care, about you." He says, "And if that's what it takes for you to be happy, if losing you is what it takes then, there's no other choice but to set you free."

With that he let go of the girl who did not have the strength to let go her own demons. And once again, he gave me something that you could never provide.

*The above image was hand drawn by the writer
Written by Unknown at 6:11:00 PM