It's hard to believe that my (nearly) monthly entry to Indonesia Mengglobal took a pause for more than a year. Taking on other responsibilities distanced me from writing, the thing that made it possible for me to be part of this increasingly impressive organization. But, a glitch in one of the Content Director's schedule made it possible for a draft written in early 2015 to be published earlier this month.

"Jangan Mati Kutu Sebelum Mendaftar" was written in Bahasa Indonesia to let readers know that dreams often perish due to a simple loss of faith. 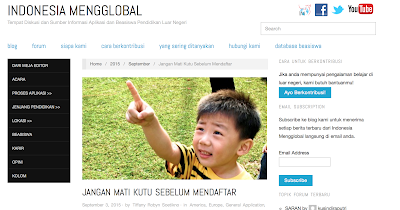 Ironic, isn't it? I should be last person writing this piece because I should be the last person to talk about conquering fears. A constant scheduler, to-do-list writer, and tactic maker, in some ways, I conquer my fears in very minute, yet concrete steps. I am the most frightened wall scaler, as I hold on to rationalized strategies.

Yet, perhaps, this whole issue on authority is better saved for a different time.

For now, know that even the scardiest-cats succeeded in finishing two degrees in four years with a bit of push and a bit of anxious scheduling.

For now, I shall translate the piece for you to further peruse.


*The image was taken as a screenshot from IndonesiaMengglobal.com
Written by Unknown at 7:43:00 AM