Without a strong, enduring bond, separation is likely to be permanent. A relationship that swerves in and out of our lives are common but unreliable. Time spent together will mean nothing more than a memory.

At three I met a girl with long braided hair on a tour to Australia. It was the first and last time, my parents and I took a  holiday tour directly from Indonesia. Memories of touching her hair and holding her hand are corroborated by fading photographs. Every so often, I think about that girl and I wonder where she is. A few years older, she is probably employed and wedded. If her family didn't immigrate during the 1998 riots, she is probably still in Indonesia. Though, probabilities could project her story with a certain margin of error, we won't be holding hands any time soon.

Now, I would tell 3-year-old me to either stop making friends or enjoy it enough to become a sweet memory, but not too much so that it threatens to shatter my heart. 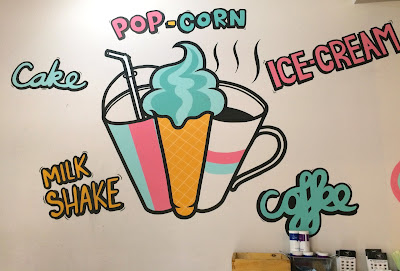 On the other hand, when I left for New York, I neither felt sad or worried about the bonds I've created back home. The night before the flight, I had dinner with thirteen of my closest friends. Nowadays, I only speak to three of them on a weekly basis. In the past month, I have chatted with another six. Nine out of thirteen is decent, but it is far from superb, in light of the history we've shared. Despite the extrapolated probability, I left Jakarta feeling confident that somehow we will remain in each other's lives. Even if we failed to do so, we would see each other at reunions so long as nothing bad happens to one of us.

Like most things in life, those in-between are always the hardest. Without an agreed upon label, a relationship often struggles to proceed. In tenth grade, I attended a five-day conference in Singapore where I met thirty-odd participants from different parts of Asia. For five days, we slept, ate and worked together. We chatted and teased each other during bus rides. We shared advice and contacts. And finally, we promised to keep in touch. We haven't spoken to each other for the past five years. We've changed and discounted our memories of those five days. Reaching out, out of the blue seems uncalled for. What is there to talk about? What is there to discuss? Without a uniting context requiring urgent attention, "Hi!" will never sound right.

Looking back, I would not trade those five days for just a typical week in school. As brief as our interactions were, the knowledge and lessons they imparted shaped me in unexpected ways. For instance, despite having a basic conceptual understanding of this matter, I learned that my behavior, actions and decisions represent a world beyond my own. They represent my nation and culture. And they will color other people's judgments.

Unfortunately, not all things in life are meticulously arranged to provide targeted giveaways. A one-on-one relationship with a guy casually introduced by a friendly acquaintance can be hard to maintain. Without so much as a label to keep the relationship going, I was left to choose to continue talking or just let him fade away, joining a wallpaper of characters that had lost their significance. Often I regret our first meeting. Perhaps, it is better off to guard my heart and remain inside a shell. Other days, I am happy to have met him, to have talked to him and to have discovered that every so often my walls can come down in a matter of minutes. Despite my reputation for being strongly decisive, I find solace in my fluctuating feelings over our relationship. And I am glad that I decided to turn up instead of cancel after a long day of work or after having my wisdom teeth removed.

Growing up, I repeatedly watched 10 Things I Hate About You. To be completely honest, I could not help but scoff at the main couple for getting attached, months before college. Kat would move halfway across the country to Sarah Lawrence College, of all places, leaving behind Patrick. So why would they start a relationship? And yet, my heart melted when they kissed during a session of paintball and my tears fell when she delivered her infamous poem. Clearly the value of their relationship was not solely based on the future, like most cultures often perceive. Rather than focusing on what would take place in a year, they focused on the now. They realized the potential in enjoying that special bond.

One could argue that what Kat and Patrick shared is called puppy-love. But in today's world, despite increased ease to communicate, having an instant connection isn't easy. The probabilities of building a solid relationship and maintaining it are slim. Forecasting the future is a fool's game.

Building a solid relationship can be time-consuming, especially for people, like myself, who find it extremely difficult to open up, to let go, and to just be "me". Whether it is driven by fear of disappointment or embarrassingly bad past relationships, it prevents us from letting others in and making quick connections. Personally, I rarely cast a wide net. If anything, I play nice whilst observing the field. By sheer luck, I usually fall into the right group, a group that allows for the vulnerable and uninhibited me to show.

Perhaps, this is the very reason why keeping in touch nags me at the core. I prefer to build lasting relationships. Most of the lasting relationships I've had required effort and commitment, but are sanctuaries for our true selves. The three high school friends that I speak with every week are truly my best friends. We call on each other's shit, listen and try to understand each other's insanity, and work through each other's problems. Strangely enough, we care for each other. Same goes for my newfound friends in graduate school. Never before have I been able to physically lean on a friend's shoulder or intertwine my fingers with theirs.


Additionally, keeping in touch is invaluable because, without fail, I become growingly invested in their careers, relationship with others, and struggles. To lose touch is to reach the middle of a book and have the remaining pages burn. Only books that fully engrosses its readers and encourages her to explore her own vulnerabilities will be terribly missed.

Unlike books, lives within a relationship are not neatly written out. Most times, one can't and shan't take a peek at the end of another person's story to determine whether to proceed.

Half the fun comes from building a solid story about you and me without considering its end, without knowing what you and I would lose by giving it our all, and without thinking what we would become...


P.S. But keeping in touch goes beyond building a story. In many ways, it is about spending as much passing time with the people you love and the people you can be yourself with.

*All photos are owned by the author
Written by Unknown at 9:09:00 PM