By the end of my first year, I began writing poems in my native language. Random whiffs of nostalgia made it harder and harder to distance myself from home. I wrote about the traffic, the world underneath the overpass, and the stench of wet trash. I longed to take a leak atop a squat toilet. I wanted to pause my dreaming to hear the adhan before the sun is barely revealed. All this madness translated onto the page, streaming out of my brain and onto my fingertips like leaking ink from a toppled ink pot.

Even so, I did not have the support system to hone my work. There was only one other person on campus who spoke Bahasa Indonesia. No one at arms length was available to critique the words that I had put together. So, without thinking twice, I shoved it under a mountain of folders and files. My hunger to express myself in Bahasa Indonesia soon crept up in my work.

For a set design class, I took the song Bunda by Potret as the foundation and inspiration for a set built of clouds and Tiffany blue material. Though the song barely resonated with my class members, I could feel the vibration running through my limbs as I put together a miniature version of the set. I did not need to justify the decision to use an Indonesian song like I had to in Indonesia. On the other hand, I felt misunderstood and detached from those around me.

I was spending the present in the past.

I was speaking a language that no one understood.

The funny thing, though, is that when something is sufficiently meaningful it will snowball into a mountain that will, sooner or later, experience a series of avalanches. Basically, the little character within me who was determined to communicate in Bahasa Indonesia was shouting at the top of its lungs, saying "Look at me! Look at me!" She shouted so loudly that snow began to fall and an avalanche was fully charging through my head. 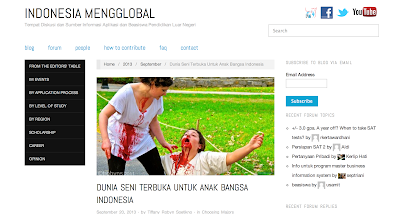 The moral of the story seemingly is the fact that organic desire will manifest itself with time. The right moment will come where these ambitions meet to create something meaningful for the host. As a writer who had not publicly written in Bahasa Indonesia for so long, it took dedication and determination to create something that I could be proud of. In this modern day and age, I tend to forget that the perfect opportunity will come by and sweep your characters into a world of satisfaction.

Acknowledgement:
Martin Tjioe for your guidance and reassurance.
Afrizal Malna for inspiring me to dive into the Indonesian art scene and reemerge to testify on paper.

*Writer owns rights to all the photographs
Written by Unknown at 6:20:00 PM